The Filters Podcast Series is the first digital offering of nearly 40 years of multidisciplinary research on different aspects of human consciousness by members of the ICRL community. Our members include artists, scientists, engineers, and philosophers and cover a broad range of perspectives on how consciousness and perception directly alter the physical world. Originally presented as a webinar series, each episode is moderated by one of the authors of the 14 essays that comprise Filters and Reflections: Perspectives on Reality (ICRL Press, 2009), an anthology inspired by the original article, “Sensors, Filters, and the Source of Reality.”

Episode 1: Introduction
Brenda Dunne, President, ICRL
The traditions of some Native American cultures confront the unexplained by considering it from several different perspectives. More recently, a similar concept was proposed in the 2004 essay by Robert Jahn and Brenda Dunne, titled “Sensors, Filters, and the Source of Reality.” The thesis states that consciousness constructs its reality by ordering the information it derives from the external world through an array of physiological, psychological, and cultural filters. In this webinar series, a number of distinguished scholars present commentaries on this topic. Drawn from a broad spectrum of professional and personal perspectives, each contribution offers a unique and fascinating glimpse of how the filters of consciousness bear on the construction of experience and its style of representation.

Dr. Igor Dolgov, Asst. Prof. Engineering Psychology, New Mexico State University
The universal truths described in many animist, pagan, and eastern traditions argue for a psychological theory that can represent embodied experience as a platform for modeling mental processes. An ecological framework is proposed that incorporates the teaching of pan-cultural traditions into a more comprehensive model of consciousness, capable of accommodating the experiences of everyday life, as well as those of functional altered states of consciousness and of many phenomena regarded as anomalous.

Dr. Vasileios Basios, Interdisciplinary Centre for Nonlinear Phenomena and Complex Systems, University of Brussels, Brussels, Belgium
The prevailing naively reductive, dogmatic science (or “scientism”) wants to keep fitting reality into its mechanistic vision for science. But real science would not allow preconceived ideas to fashion the picture of the world. Rather, science allows the essence of the world to fashion the nature of our concepts. “Complexity,” dealing by its very nature with multifaceted systems allowing a plethora of levels of description, has made such a radical change not just possible, but imperative. Never before has the need for such a qualitative change in science been so apparent and pressing. As we shall see, this calls for a radically new kind of science and a new kind of scientist, fearless of self-reflection, concerning themselves not only with the study of nature, but equally with the nature of their study.

Nelson Abreu, Electrical Engineer, Coral Gables, Florida
The ability of consciousness to acquire information and experience about places and events beyond the usual physical senses has been reported since the beginning of recorded history and described in many cultural traditions. In recent times, these phenomena are referred to as “Out-of-Body Experiences (OBEs),” and are closely related to those described as “Near Death Experiences” or “Remote Perception,” among other labels. While still regarded with skepticism by mainstream science, a substantial number of scholarly studies and subjective reports have attested to their reality and raise important questions about the nature of consciousness and its interactions with the physical universe. This evidence suggests that consciousness can not only transcend the physical body, but also reduce or modify the effects of the physiological, cultural, and psychological filters that limit and color this mind-Source communication. The out-of-body experience and allied phenomena also suggest the existence of subtle “bodies” and dimensions that need to be explored and integrated into our current models of consciousness.

Dr. Antonella Vannini, psychotherapist and Dr. Ulisse di Corpo, statistician, Rome, Italy
The term phenomenology derives from the Greek words meaning phenomenon, logic and heart. It is used to indicate the logic which is behind the phenomena of the heart. Recent research has shown that the heart reacts in advance to future stimuli and that a poor perception of feelings and emotions reduces the ability to decide advantageously and to finalize our behavior. In science the word phenomenology is often used to indicate mathematical theories that describe the logic that links observations and experiences. In cardiophenomenology the mathematical model is the Syntropy model which was developed in 1941 by the mathematician Luigi Fantappiè.

Dr. Ruth Rosenbaum, psychoanalyst, New York City
Dr. Rosenbaum discusses the relevance of studies in psi phenomena to the process of change and growth in psychotherapy. This dynamic is examined from the perspective of the interaction between patient and therapist, and how each affects the other through the modification and expansion of their respective consciousness (and unconscious) filters.

Episode 7: You’ll Never Get There From Here: REG Experiments

John Valentino, Menlo Park, California
Random Event Generators (REGs) have attracted the attention of scientists and engineers interested in exploring consciousness correlated physical phenomena because they produce extremely reliable baseline data and enable the possibility of robust statistical exploration of mind-matter effects. Unfortunately, in spite of many significant experimental databases and promising pilot projects, broad success in replicating consciousness correlated anomalies has been elusive and there is little consensus on the primary physical and psychological drivers of the phenomena. In addition, many attempts to “out-engineer” or understand the effect through traditional objective viewpoints have resulted in little or no success and pragmatic applications of the effects are arguably no farther along than they were decades ago.

This informal discussion will draw on stories and experiences “from the field” to touch on some of the key scientific, personal, and societal issues involved in attempting to meaningfully explore consciousness related anomalies using Random Event Generators. Rather than proposing definitive answers, it will seek to highlight some important questions and suggest why certain aspects of our scientific paradigm and conventional notions of reality may not be conducive to understanding these effects.

John Valentino began exploring consciousness related anomalies at the PEAR lab when he was seventeen years old. Shortly afterward he co-founded Psyleron, an organization that provides Random Event Generators (REGs) and REG-related technologies to the public for the purpose of enabling researchers and interested laypersons to explore and come to their own conclusions about the nature and reality of these phenomena. He holds a Master of Science in Engineering degree from Princeton University and a Bachelor’s degree in Integrated Business and Engineering from Lehigh University.

Episode 8: The “Macroscope”: A Tool for Exploring Topological Relations

Zachary Stark Jones, Artist, New York City
In this essay, the author describes the concept of a “macroscope” – a model that synthesizes forms across the scales of universal structure. The self-reflective activity of consciousness is shown in a physical manner, providing conceptual access to aspects of reality beyond the reach of direct experience. The ancient alchemists adhered to the Hermetic principle: “What is below is like that which is above, to accomplish the miracles of one thing.” Scale is paramount to this process, as our tools and models facilitate awareness beyond the dimensions of our body. Those tools and models become part of the language of our thinking, and they become the governors of perception and cognition. By a mind-matter dialectic can the instruments of our perception bias the physical reality? The methods the ancients used for conveying systems knowledge can still be utilized today in the development of human consciousness. Zachary StarkJones is an artist with an interest in integrating techniques of the past with technologies of the future. 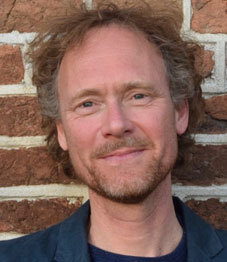 For over 25 years a group in the Netherlands and Germany have developed a practice for working with the energetic information fields of large areas of land and organisations. The early years included work in a Russian national park as well as large estates in Eastern Europe and the UK and demonstrated that this work at a distance was having a measurable positive impact on the nature and wildlife of these areas. The practice went through a journey from radionics, to resonance therapy, to ECOtherapy and now to ECOintention, and led to what became the Center for ECOintention. Dr. Merry has also been responsible for bringing the PEAR equipment to the Broughton Sanctuary in Yorkshire, UK, to create a visitor experience to tell the PEAR story and have people experience directly their interconnectedness with the world around them. (See The Wyrd Experience.)

Peter is co-founding Chief Innovation Officer at Ubiquity University and is one of the world’s top experts on transformative leadership, working in and across different sectors, training government ministers, CEOs and civil society leaders In facilitating integral change processes in multinational corporations and government ministries. He is a recognised expert in the field of futureproof learning, evolutionary systems dynamics and integral leadership. He had his first book published in English and Dutch (Evolutionary Leadership, 2005) a second one in 2019 called Why Work? on designing work for people and planet, and a third one in November 2020 called Leading from the Field that describes 12 principles for working consciously with the energetic information fields of any project that you lead. He has an MSc in Human Ecology from Edinburgh University and a PhD from Ubiquity’s Wisdom School on volution theory. For more information, see https://petermerry.org, and LinkedIn.