The Evolution of Consciousness: A New Science
Andrew Lohrey 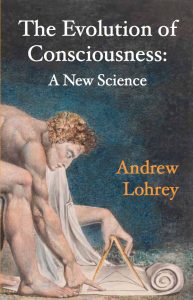 The Evolution of Consciousness begins to set an agenda for science to include consciousness. This program may well result in making redundant many of the cherished assumptions of mechanical science. When consciousness is considered, for example, the standard fiction that space and time are physical features of an independent universe is seen for what it is: an illusion.  Both are features of universal consciousness.  The universe is not full of information, as many scientists have thought, but full of the relations of Meaning. This book demonstrates how humans have seven ways to see and make meaning of the world. These represent the steps in the evolution of consciousness as well as the developmental phases in each person’s spiritual path.