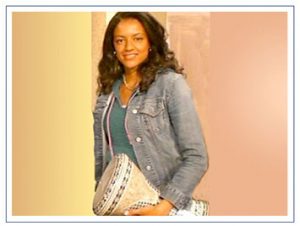 Natalia Perlaza was born in Colombia, South America and moved to the United States as a teenager where she earned a basketball scholarship to attend Albertus Magnus College. Several years ago, Natalia began studying Middle Eastern Drumming, and since then has performed across the United States, Turkey and Egypt (where she appeared on Egyptian TV), and has shared the stage with master drummers such as Said El Artist, Raquy Danziger and Okay Temiz.

Currently she plays as a guest musician with Raquy and the Cavemen. She has also recently appeared on the cover of Chronogram Magazines after collaborating with artist and engineer Edward Tufte.

She has created a sound based meditation that complements our common experience of life and provides a path to attaining wholeness while living “in the world.”