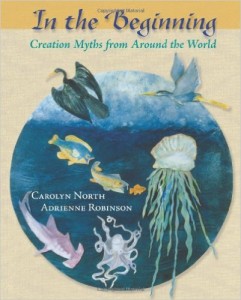 These stories demonstrate that creation is ongoing, everywhere and always, and that all of us are creators all of the time. This engaging
book of images and stories is ultimately about creativity in all its forms. Originally an exhibition, In the Beginning has appeared in museums, galleries, churches, and schools in several U.S. cities.

An audio version is also available from Findhorn Press.

Watch these video excerpts of two of the creation myths from In the Beginning: