Stuff on the Edge 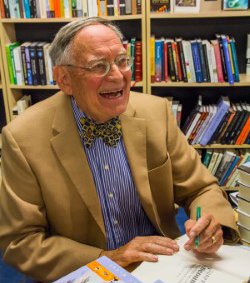 From Scott McVay’s book Surprise Encounters with Artists and Scientists, Whales and Other Living Things, given five stars by Kirkus, he will choose one-third of 152 stories to weave a tapestry of “Stuff on the Edge.”  He is excited at the prospect of beginning with Aimee Morgana and N’Kisi, a loquacious African grey parrot, and Rupert Sheldrake, tuning the talk to the raison d’etre of the ICRL for maximum interaction.  Among the persons to be touched on is the The Dalai Lama, two dolphins with a fidelity almost beyond our comprehension, another who reveals how dolphins can save humans, an Inuit, Raymond Aguvluk, who knows whales beyond the Bowhead and Beluga, the sonic response of Orcas to a wild night of the Aurora borealis, Carl Sagan, Pete Dunne, NJ’s lead birder, the Loch Ness Monster, the turning point of a life, shuffling off the mortal coil…plus a few poems.

Scott McVay was founding Executive Director of two foundations, Robert Sterling Clark and Geraldine R. Dodge, and been an active player in two others, the W. Alton Jones Foundation and the Knowles Science Teaching Foundation. He discovered and documented the six-octave song of the Humpback whale, and with Roger Payne published a cover article in Science on that surprisingly beautiful phenomenon. Scott created a nationwide Chinese language initiative that lifted the number of high schools where Mandarin was taught from three to over 1,500. He organized and led two expeditions to the Alaskan Arctic to study, film, and record the majestic Bowhead whale, the first leading to a cover article in American Scientist and the second to an hour-long documentary by the National Film Board of Canada.