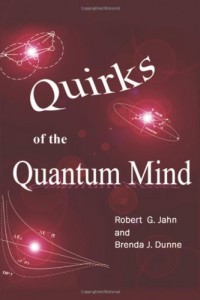 This book does not offer a quantum mechanical ‘explanation’ of human consciousness. Rather, it proposes something far more radical: namely, that quantum mechanics, like any other model of human representation, is both a reflection and a product of the mind, is fundamentally intuitive, and describes a reality of which we are an integral component. In a certain sense, it might be viewed as a textbook on the psychology of atomic phenomena. An extensive Appendix presents quotations from the philosophical writings of many of the patriarchs of modern physics, indicating that the role of consciousness in physical reality was central to their thinking as they hammered out the mechanics that would change the face of 20th-century science.

Quirks of the Quantum Mind is an expanded version of the 1986 PEAR technical note titled “On the Quantum Mechanics of Consciousness, with Application to Anomalous Phenomena” that was published under the same title in abbreviated form in Foundations of Physics.